For fans of American Horror Story: Murder House a Tate Langdon costume is an excellent idea. Especially for a halloween costume, fancy dress, or a simple cosplay. There are two way you can make your own Tate Langdon costume depending on how much time and money you wish to invest.

The second option you have for making your own Tate Langdon costume is to dress like he does in the school shooting scenes. This version of the character is, in our opinion, a lot more interesting to create. Here is everything you will need to dress like Tate Langdon in those scenes. 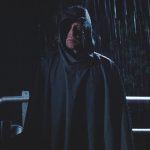