Another variant of the Angela Martin fancy dress is the nurse costume that she wears in an attempt to win the office fancy dress competition. 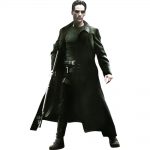