A hugely popular fancy dress is a Aziraphale costume from Good Omens. This costume has grown in popularity following the success of the Good Omens show. This is a relatively easy costume to make although it does require some very specific items of clothing. It works well as a fancy dress you can create with a friend who would dress as another character from Good Omens. 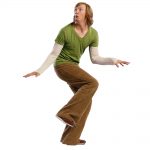